A Good Talk with Mira Jacob 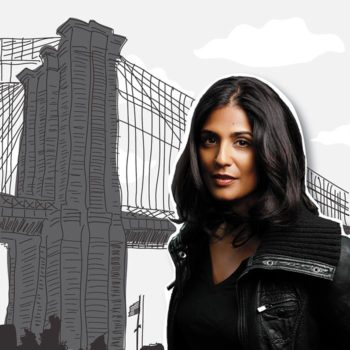 A few weeks ago, over lunch in Brooklyn, writer Mira Jacob and I were speaking about representation in Hollywood. “You were never going to see the version of yourself that you knew existed if you weren’t going to deal with the monsters they put out,” she said. Surviving to become a considerate, justice-oriented person requires work, dedication, and constant fine-tuning. But, it’s a tricky line to keep straddling, which is why Good Talk: A Memoir in Conversations, a book Jacob wrote and illustrated, is such a magnanimous feat.

Many of its conversations center around Z, her half-Indian half-Jewish son. At the time of conceptualizing the book, Z was six and as the pages evolve, we are wrapped into the difficult talks we often avoid having with our children. But also the ones we avoid having with ourselves, with our community, our family, and our peers.

Jacob previewed Good Talk through a viral BuzzFeed piece four years ago. The format was different; it listed ‘37 Difficult Questions From My Mixed Race Son.’ Its overarching appeal, possibly, was its simplicity. Or how resonant it was for so many interracial families. I found myself relating as a diaspora kid, as a third culture kid, as well as a multinational kid. Jacob beautifully executes the tumultuous exploration with oneself, but from a perspective we rarely see: an Indian woman speaking candidly with her biracial son.