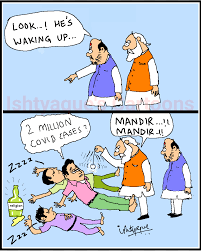 In a comic strip of two panels, the top panel shows two older men in Nehru jackets — the current Indian prime minister and his most trusted advisor — pointing to the floor. “Look!” they say. “He’s waking up.” The second panel zooms out onto three men, drowsy and intoxicated. A bottle labeled ‘religion’ lies next to them. “Two million COVID cases,” one of them mutters weakly. He is lulled right back to sleep by the soporific effect of the swinging pendulum in the hands of the saffron-clad prime minister, who is chanting “Mandir…Mandir…”

Amateur cartoonist Ishtyaque Ansari created this sucker punch of a cartoon in the wake of the bhoomi puja ceremony for the new Ram temple at Ayodhya, on the spot where Babri Masjid stood. It is part of a larger trend of expressing dissent through online satire: cartoons lampooning the present government are everywhere on social media, from simple stick figures with thought bubbles to elaborately-sketched recurring characters who take digs at the latest political blooper. For these young online artists, no topic is too taboo, no subject too sacred: the chopping down of forests to make space for new industries; a slick PR video featuring the prime minister feeding a peacock, the national bird of India, while COVID-19 rages unchecked; news about Facebook’s collaboration with the government in spreading hateful propaganda. These cartoons reflect, in equal measure, the displeasure and dismay of millions of Indians watching their country tilt far right. As India continues to clamp down on voices of dissent, several young amateur cartoonists have chosen to express their protest in the form of comic art.

Satirical cartoons are not new to India. Caricature as a form of journalism may have been imported from the British, but it was quickly and deftly trained on the British Raj itself: as early as the 1860s, Indian newspapers such as the Amrita Bazar Patrika and Sulav Samachar carried cartoons criticizing colonial rule. The popular British weekly, Punch, spurted several Indian versions, such as the Oudh Punch and Punjab Punch. In 1925, The Hindu, which remains Chennai’s foremost daily, published its first cartoon. In post-independence India, there is an apocryphal story about the prime minister Jawaharlal Nehru’s request to the most influential satirical cartoonist of his times: “Don’t spare me, Shankar.” K. Shankar Pillai featured him in more than 4,000 cartoons, and not always kindly — when asked about them, Nehru responded, “It is good to have the veil of our conceit torn occasionally.”

The latter half of the 20th century produced several prominent cartoonists, from R.K. Laxman with his beloved Common Man character, to Shiv Sena leader Bal Thackeray, who, like Shankar, began his political cartooning career with the Free Press Journal before launching his own weekly in 1960. Their styles were varied, their languages different, but the common thread was their incessant parodying of political figures and their missteps. Even during the dark Emergency years of the 1970s, when then prime minister Indira Gandhi had curtailed several freedoms, cartoonists carried on with their job of criticizing state overreach. Veteran cartoonist Abu Abraham’s single-panel comic is still remembered, depicting a politician with a placard that read “Don’t you think we’ve got a lovely censor of humour?” To this day, stalwarts such as Rajinder Puri, Aseem Trivedi, Ajit Ninan, E.P. Unny, and Surendra are respected not just as cartoonists but also as political activists because of their dogged questioning of authority.

Many of the best-known cartoonists in India today espouse progressive politics — veteran graphic artist and cartoonist Orijit Sen, whose style fuses memes with cartoons, said he can remember only a few “poor quality cartoons, possibly put out by the IT cell of the BJP [Bharatiya Janata Party].” That said, globally, cartoons have also been a means of right-wing communication: Nazi-occupied France, for instance, created comics to spread propaganda, and more recently, some argue that memes helped elect U.S. President Donald Trump. In India too, there are cartoonists and meme makers who fan the fires of communal hatred, but — for the moment — remain overshadowed by progressive artists and illustrators.

What has changed in recent years is that official tolerance for dissent has plummeted dramatically. “Today’s politicians are so fragile that even a joke can dismantle them,” meme artist Hari Krishnan said. “They need to hold on to their constructed sense of gravitas, so obviously there is no room for any kind of criticism.” As a result, the work of cartoonists, young and old, professional and amateur, has become more urgent and more fraught. “Sometimes I feel like there’s no hope,” Alok Nirantar, editorial cartoonist for the Sakal Media Group said. “But I have to go on, because my job as a cartoonist is to burst propaganda, destroy lies, and tell people what is really happening out there.” 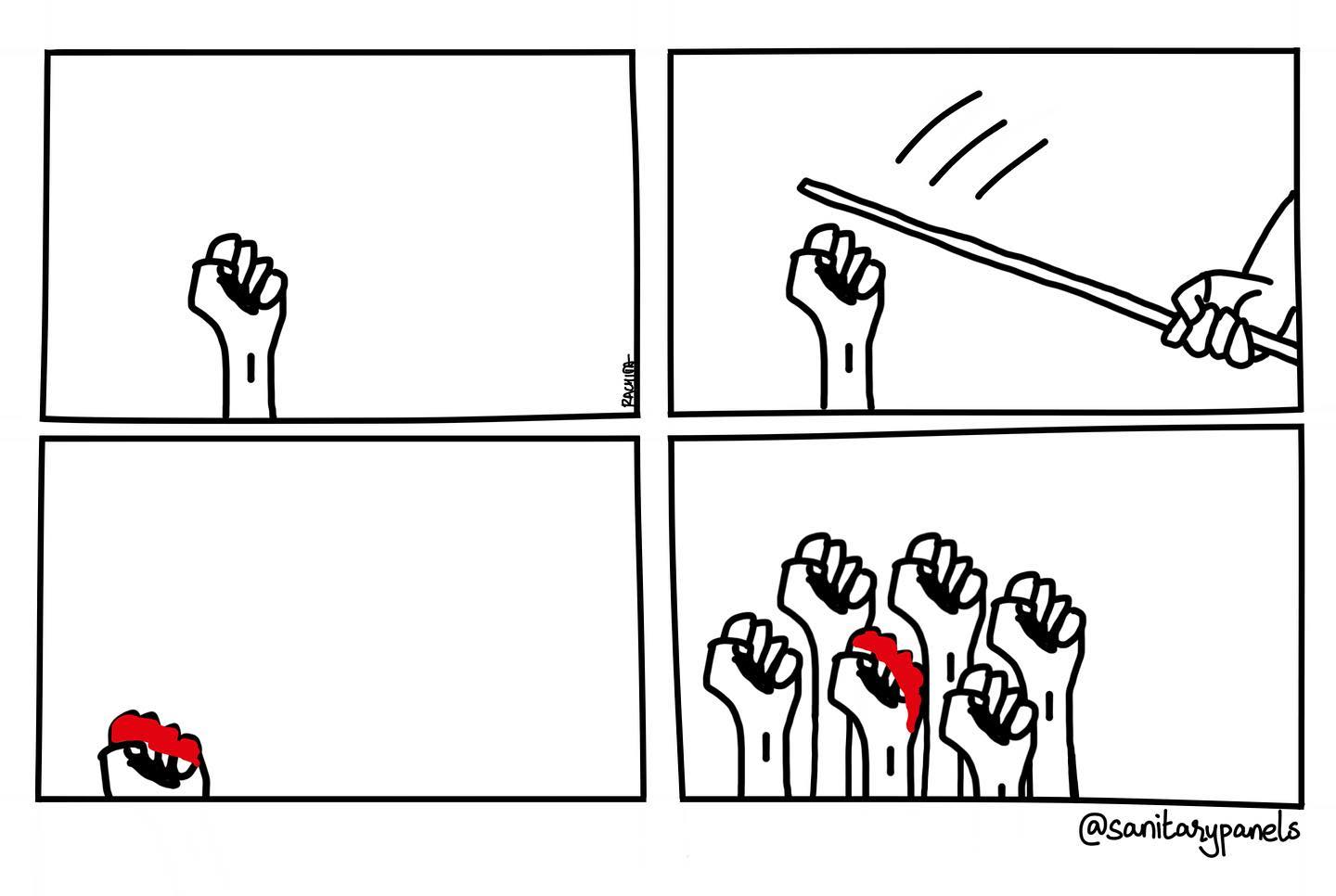 Delhi-based Rachita Taneja, 28, started the popular Sanitary Panels account in 2014. She chose the name, a dig at taboos about menstruation, during a brainstorming session with friends, for being “in your face and feminist.” Her initial focus on women’s rights expanded to a broader commentary on current affairs, an easy leap, she told me, because “feminism is inherently political, so in that sense, my work was always political in nature.” A human-rights campaigner with an interest in digital rights — she is co-founder of India’s Internet Freedom Foundation — Taneja doodles stick figures in comic strip form to convey her protest. On Facebook, Sanitary Panels has over 75,000 followers (and over 65,000 on Instagram).

Taneja said she began publishing her doodles “when students started getting arrested for voicing their opinions on social media.” Her most popular illustration, in terms of engagement, is a four-panel comic published last winter, amid mass student protests against the Citizenship Amendment Act of 2019: it depicts a raised fist struck down by a baton, then raised again, bruised and bloody, surrounded by a dozen others. It made its way onto protest banners and placards.

In one of Taneja’s recent comics, one stick figure asks another what it’s like living in India. “Can’t complain,” says the other, then adds: “I mean, I literally can’t complain or the government will arrest me.” In 2012, before the current government assumed power, cartoonist and political activist Aseem Trivedi was arrested on charges of sedition for his ‘cartoons against corruption’ series. These days, forwarding a cartoon can land you in trouble, too: just this month, alleged Shiv Sena workers beat a retired navy officer for forwarding a cartoon lampooning the Maharashtra chief minister. 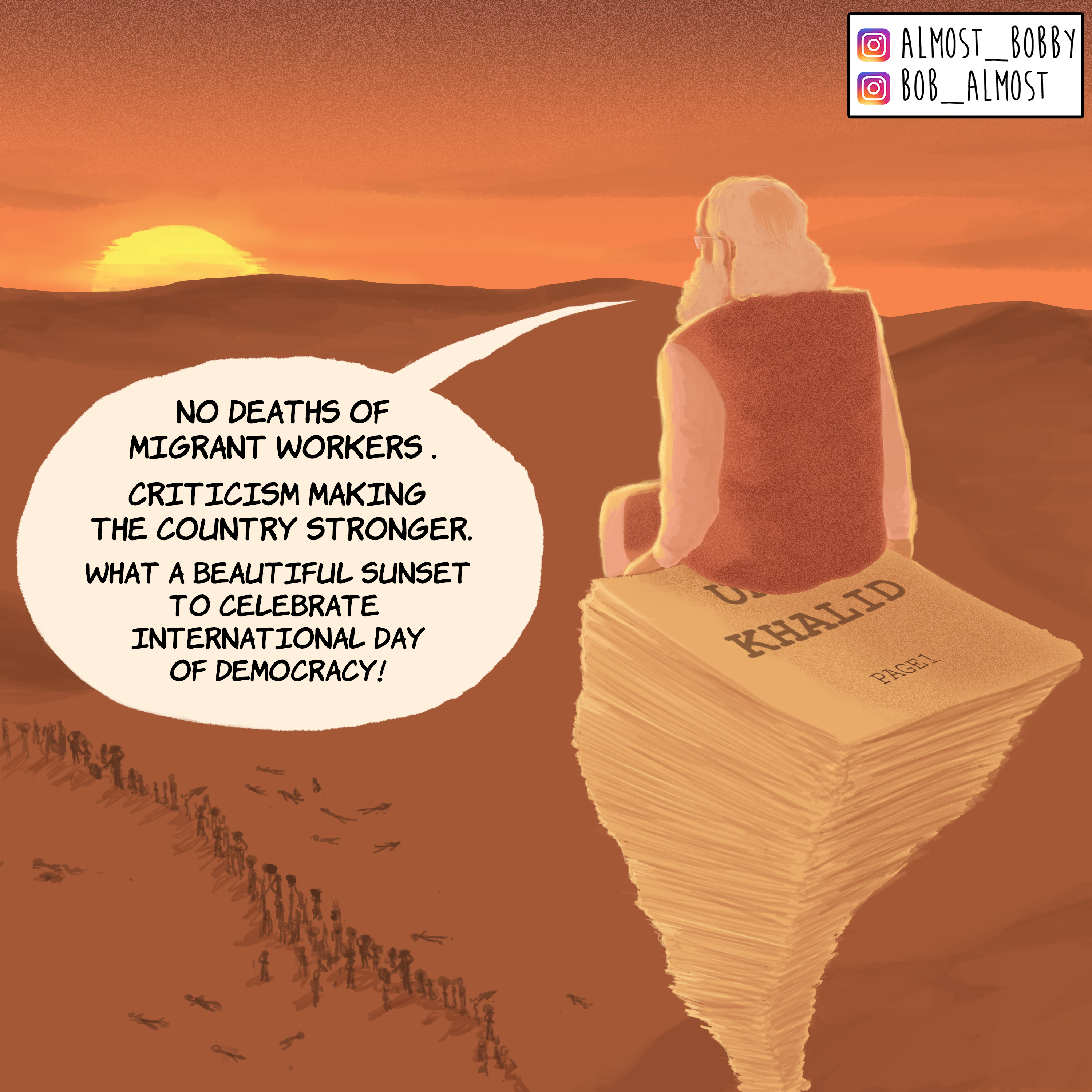 Commentary on denial, while sitting on the thesis of Umar Khalid, a student activist involved in protesting against the capital punishment of Kashimiri separatists Afzal Guru and Maqbool Bhat

In this climate, said veteran journalist Peri Maheshwar, Indian artists are being forced to choose their words carefully. “If you want to fight, you need to live to fight, so many things are out of bounds — like making fun of government emblems, or mentioning a politician by name,” he said. “Otherwise, you fight one big battle and then fall silent, because it is one individual against the might of the establishment that has decided to get you.” Sen also lauds the courage of the younger generation of comic artists who continue using art to express their protest, despite the risk of repercussions.

The creeping clampdown on dissent is also what spurred 26-year-old twins Saswata and Susruta Mukherjee to take up cartooning a few years ago. “We saw a change in the political climate,” they said. “It was getting polarized, even personal relationships were getting harmed.” After the government banned the movie Udta Punjab, which shone a light on Punjab’s drug crisis, they created their first cartoon, published on Facebook, which showed a group of men harassing a woman even as other men, including cops, watched. I must have provoked them with my dressing style, reads the thought bubble above her head. Growing up, their mother, who is a teacher, taught them “to be not ok with how things are.” “You can’t ban a movie just because the subject was not palatable to the government.”

Others in this new cohort of cartoonists include Rohan Chakravarty, whose snappy commentary on the environment and wildlife in India take on a political hue; Pencil Ashan and AppuPen who alternate between English and Malayalam while parodying political news; visual designer Siddhesh Gautam who uses bright and bold colors to comment on caste inequality. For Taneja as well as for the Mukherjee brothers, ideas come from the conversations and themes they see trending online — a news item, perhaps, and reactions on Twitter.

For all of them, the cartooning process is organic: they don’t start the day with a fixed theme in mind. For Taneja, the simplicity of the stick figure allows for a quick turnaround from inspiration to creation. Cartooning is a way of expressing their anger and helplessness, shared the Mukherjee twins. “Sometimes, we can’t even focus on our work because of an incident, like right now,” said Susruta Mukherjee, referring to the plight of Rhea Chakraborty, the girlfriend of actor Sushant Singh Rajput who stands accused of having a role in the suicide of Rajput. “The way the media is hounding her, without any notion of decency — I drew a comic around it and immediately posted it online.”

Cartoonists are vulnerable to online vitriol. According to the Mukherjee twins, innuendo particularly heightens the frenzy. They point to a recent series of cartoons mocking the PM CARES fund, a COVID-19 relief initiative helmed by India Prime Minister Narendra Modi, where they replaced Modi with Nehru. Hello, I am Nehru. Amid a pandemic, I took money from my citizens. A lot of money. “Trolls get really angry then because they know what we are saying, but they can’t do anything about it because we are not saying it openly.” 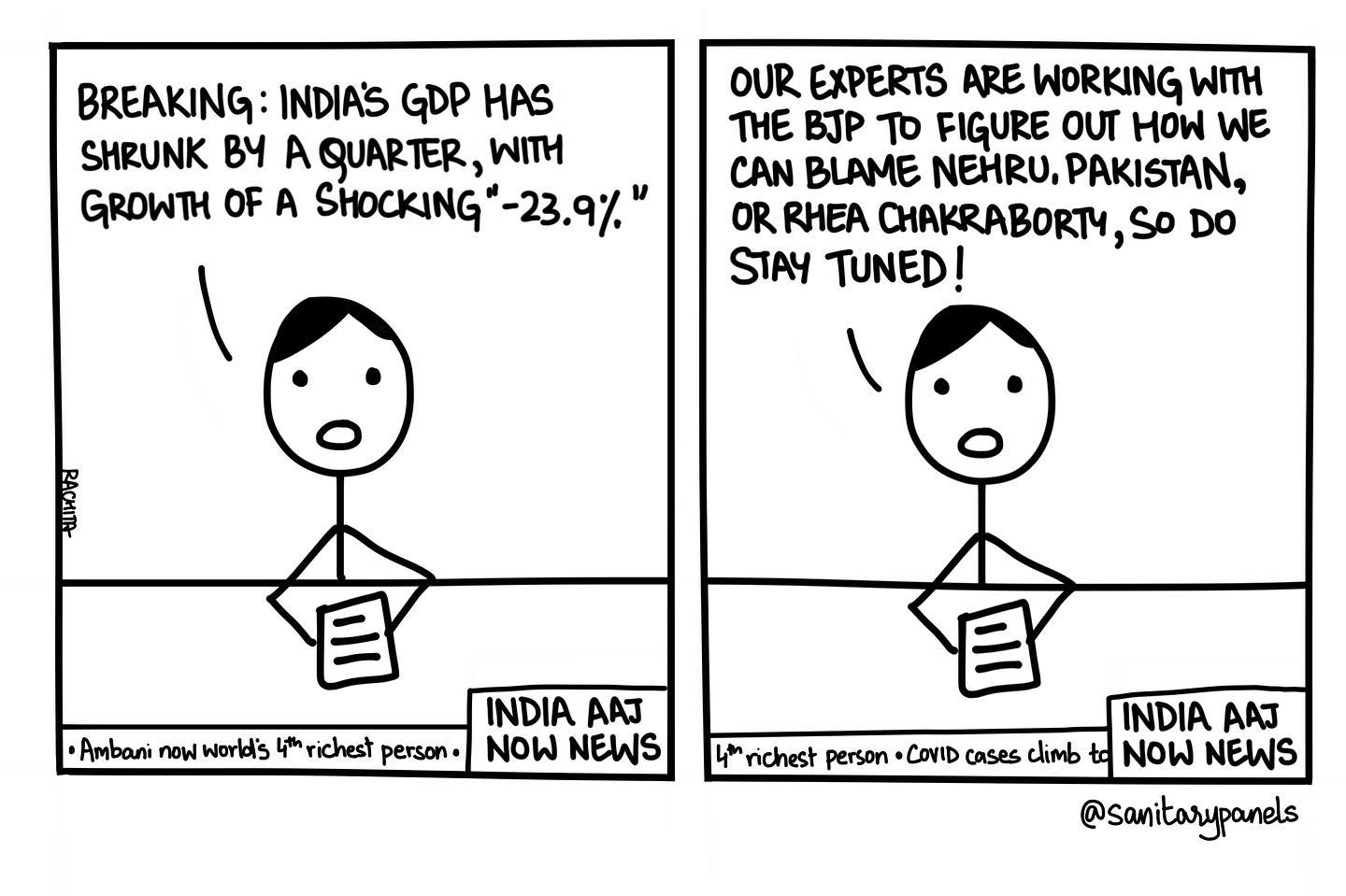 A comic by Sanitary Panels

Taneja’s answer to what attracts internet trolls is more succinct. “I am a young woman on the internet and that is enough for trolls,” she shared. “And I am talking about politics and breaking taboos and dismantling oppressive systems. So obviously there is a lot of backlash.”

Editorial cartoonists, despite employer support, do not seem to be exempt from trolling either. “Before 2014, whenever I put out a cartoon, the feedback I got was, it is a good cartoon or a bad cartoon,” said Nirantar. “Now, I am called either a Congi [Congress supporter] or Sanghi [BJP supporter] cartoonist, or crazy names like urban Naxal.” Sen echoed this sentiment: “People who see my work on social media assume that I am a paid Congress stooge or a Communist. They don’t know my history of criticizing the Congress, for instance.”

Most online cartoonists seem to have accepted that trolling and threats are an inescapable part of audience engagement. They try to ignore them or respond with humor, choosing instead to focus on the positive feedback. “We feel that our work is a shout-out against the hate that is thriving right now,” said the Mukherjee twins. “We need to accept difference and dissent instead of attacking it.”

Young or old, the cartoonists remain committed to the subversive power of humor. “Once you laugh at the bully,” said Sen, “you take away his power.”

Charukesi Ramadurai is a freelance journalist, whose byline has appeared in The Guardian, BBC Travel, Forbes, Nikkei Asian Review and South China Morning Post, among others.

How We Get the Job Done: Chitra Ganesh

Artist Salman Toor melds longing, desire, and a space for queer resistance in a small apartment in the East Village, as an ode to ghazal singer Iqbal Bano.