Amid the coronavirus pandemic and increasing politicization of society, "Ganashatru" is loudly prescient. 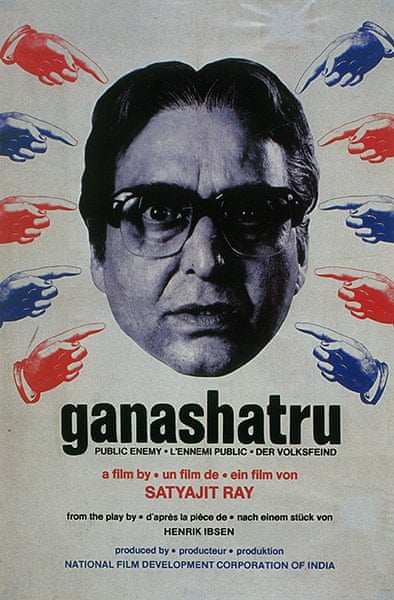 Poster for "Ganashatru," a 1990 film by Satyajit Ray

In 1881, the great Norwegian playwright and “the father of realism,” Henrik Ibsen, wrote a play addressing 19th-century morality. Ghosts, or Gengangere in Danish, is a tragedy about history repeating itself, touching on religion, incest, venereal disease, and euthanasia. Upon the play’s release, the press slammed it: “gross, almost putrid indecorum...literary carrion,” The Daily Telegraph wrote. People hurled words like “degenerate” and “immoral” at the wordsmith. In response, Ibsen released another play a year later, a scathing take on the public execution of the truth-teller, An Enemy of the People.

A century later, Satyajit Ray, seized upon the screenplay of An Enemy of the People and adapted it into the Bengali-language social drama, Ganashatru (1990). Ray was one of the most revered Indian filmmakers of all time; he even received an honorary Oscar for lifetime achievement at the 64th Academy Awards on this day in 1992. But the satirical — sometimes quietly comic but deeply tragic — Ganashatru is one of Ray’s lesser cited works compared to his greater relics, The Apu Trilogy (1955-1959),