Artist Salman Toor melds longing, desire, and a space for queer resistance in a small apartment in the East Village, as an ode to ghazal singer Iqbal Bano. 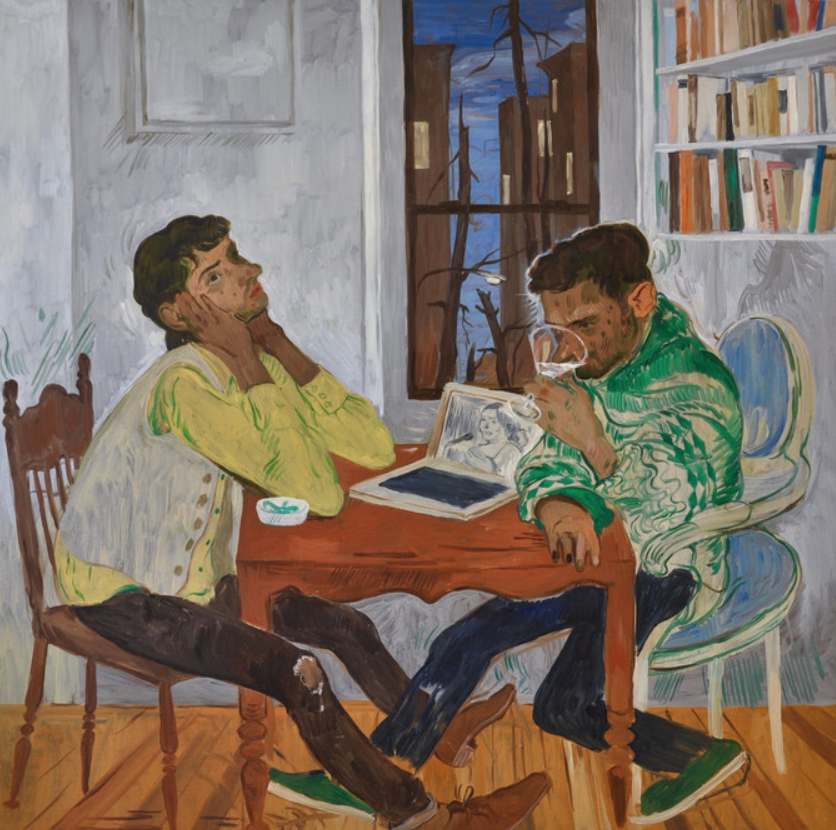 In Salman Toor’s East Village Iqbal Bano, created for his 2018 solo exhibition Time After Time at Aicon Gallery in New York City, two brown men sit at a table in what appears to be an apartment. The table is flanked by two mismatched chairs, one wooden while the other appears plush and almost Victorian. A bookshelf lines the top of the wall on the right. The left wall is bare. Dressed in a green and white sweater and patched jeans, the man seated on the blue chair brings a glass of alcohol to his lips as he stares steadily into the liquid. Clad in a vest, flowing yellow shirt, and rugged brown slacks, the other man props his head with his hands as he gazes upwards. On the table between the two figures are a white ashtray and a laptop. The screen displays a woman singing into a microphone.

“Outside,” Toor revealed to me, “is a kind of twilight with the warm lights of other private lives shining through the grid of apartment buildings, while the dead trees give an impression of autumn.”

Toor, born in Lahore, trained at the Pratt Institute, and based between Lahore and Brooklyn, encourages us to rethink notions of nation, diaspora, and region. He does not fit neatly into the confines of national borders, but rather in cosmopolitan, in-between spaces. “All my paintings are imaginary,” he explained. “There is no source material for this and the figures often resemble myself and my friends. Compositions are created without any fixed idea and without any drawing under the painting. In that sense, the brush is used like a pencil or pen.” Some of his paintings riff on Bollywood kitsch while others catch glimps