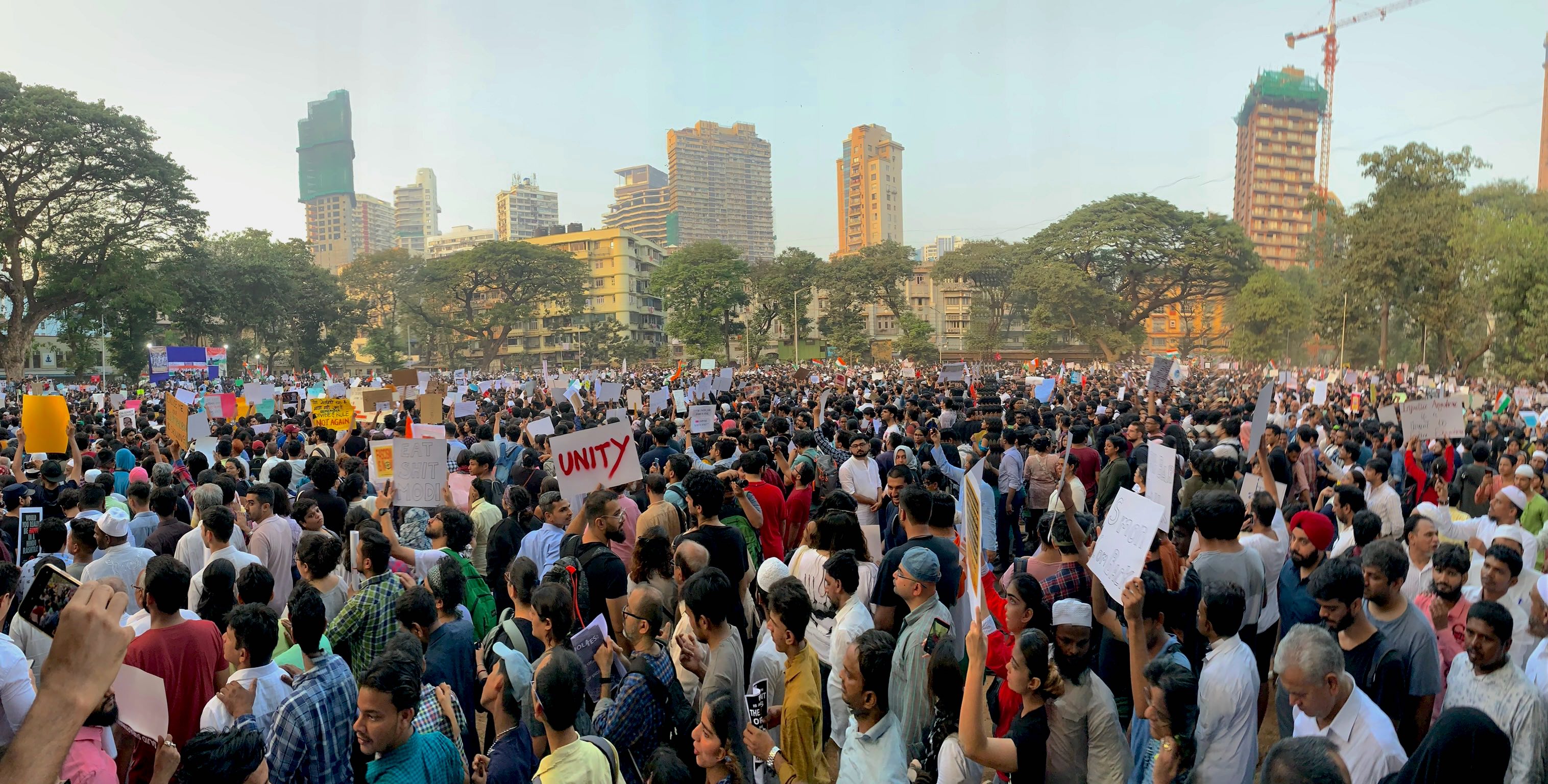 This week in India has been identity-obliterating. That’s because, of course, what it means to be Indian is being fundamentally rewritten. But self-erasure is also the spiritual effect of successful protests. They rub away your edges until you, as a selfish you, are blurred, so that you can then belong to something greater. You are jostled, shoulder to shoulder; you cannot hear your voice in the crowd, which somehow makes it easier to chant things, because chanting is vaguely embarrassing. You have to subjugate the private, nuanced vocabulary of who you believe you are to the lexicon of resistance, which is sometimes crude. The chants translate to things like, He who rules like Hitler will die a death like Hitler. My Hindi is not good enough to chant this way; I required a translator later. I don’t know all the words to the national anthem, which peaceful protestors sang tunelessly on the campus of Mumbai University on Monday. I caught strains of other slogans as we inched between Grant Road Station and the August Kranti Maidan on Thursday — nahin chalegi, nahin chalegi, it won’t do; inqilab zindabad, long live the revolution; and always, azadi, azadi, freedom, freedom. But though I was often silent, or at best lip-synching, the voices around me lifted in chorus such that I might have forgotten I wasn’t speaking. It is strange to be a believer alone. It is transcendent to be a believer in a horde. 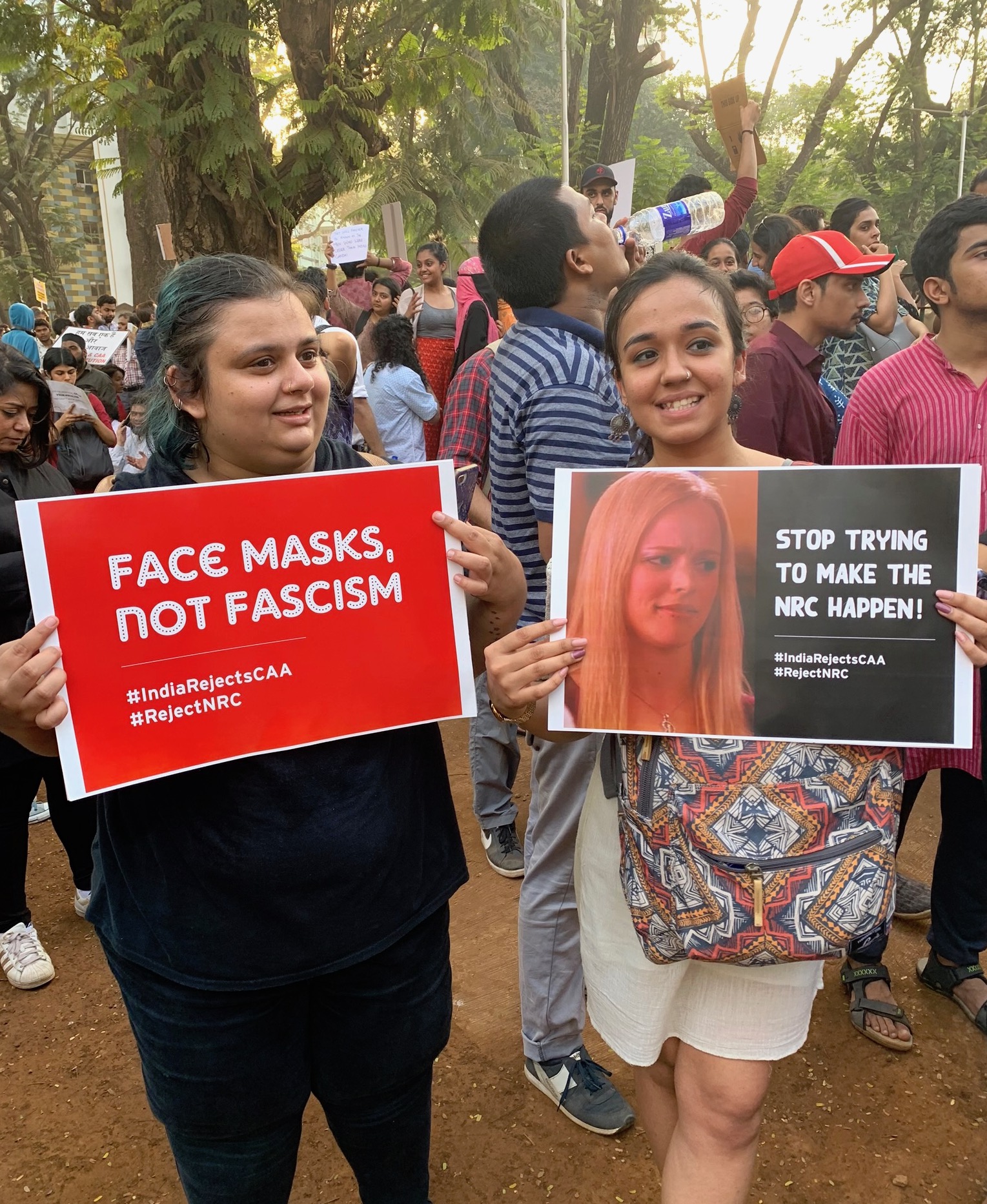 What are we protesting? Broadly, the protests represent a growing fury against Prime Minister Narendra Modi (the one who the chanters believe is ruling like Hitler) and his Home Minister Amit Shah. There are also the immediate horrors: the recently-passed Citizenship Amendment Act (CAA), which makes it easy for every religious group except Muslims to settle in India and which paves the way for the government to demand different levels of documentation depending on the name your particular ancestors may have used for God; the National Register of Citizens (NRC), which will assist the government in cataloging and denying a homeland to those it deems unwelcome, illegal, or, as the colorfully villainous Shah has put it, ‘termites;’ the Indian government’s police brutality inflicted on anti-CAA and NRC protestors at majority Muslim universities including Aligarh Muslim University and Jamia University; the government’s willingness to wantonly shut down the Internet to quell free speech — much as they have managed to do in Kashmir and now, the government’s moves to ban protests altogether, which has resulted in situations that would be comical if they weren’t so dire, like five armed officers detaining the unarmed historian and biographer of Mahatma Gandhi, Ramchandra Guha, mid-interview, on camera. Other prominent figures have been arrested, too: intellectual and activist Harsh Mander, Carnatic musician T.M. Krishna, and actor Siddharth. Buses burned in Lucknow. Water cannons were deployed outside the Jama Masjid in Delhi; lathis rained down on those assembled. But people have died; people have been shot by their own government in the world’s largest “democracy” — what a sentence! — in Assam and in Mangalore.

Will anything change?, people wonder to each other, even as we thrill at the size of the throngs. Here are the hopes: Protestors want the NRC aborted and the CAA rolled back. The government could simply decide not to implement the law now on the books; a not unheard-of solution in India. Courts could declare the law unconstitutional, citing among other things the word secular in the founding documents. (So far the Supreme Court has postponed hearings on the law.) Or, with the right amount of international attention, India could be sanctioned or shamed into undoing what it has begun. But perhaps assembly itself is the point. Assembly is the acid test for democracy. When leaders forbid gatherings, they reveal themselves, naked emperors all. 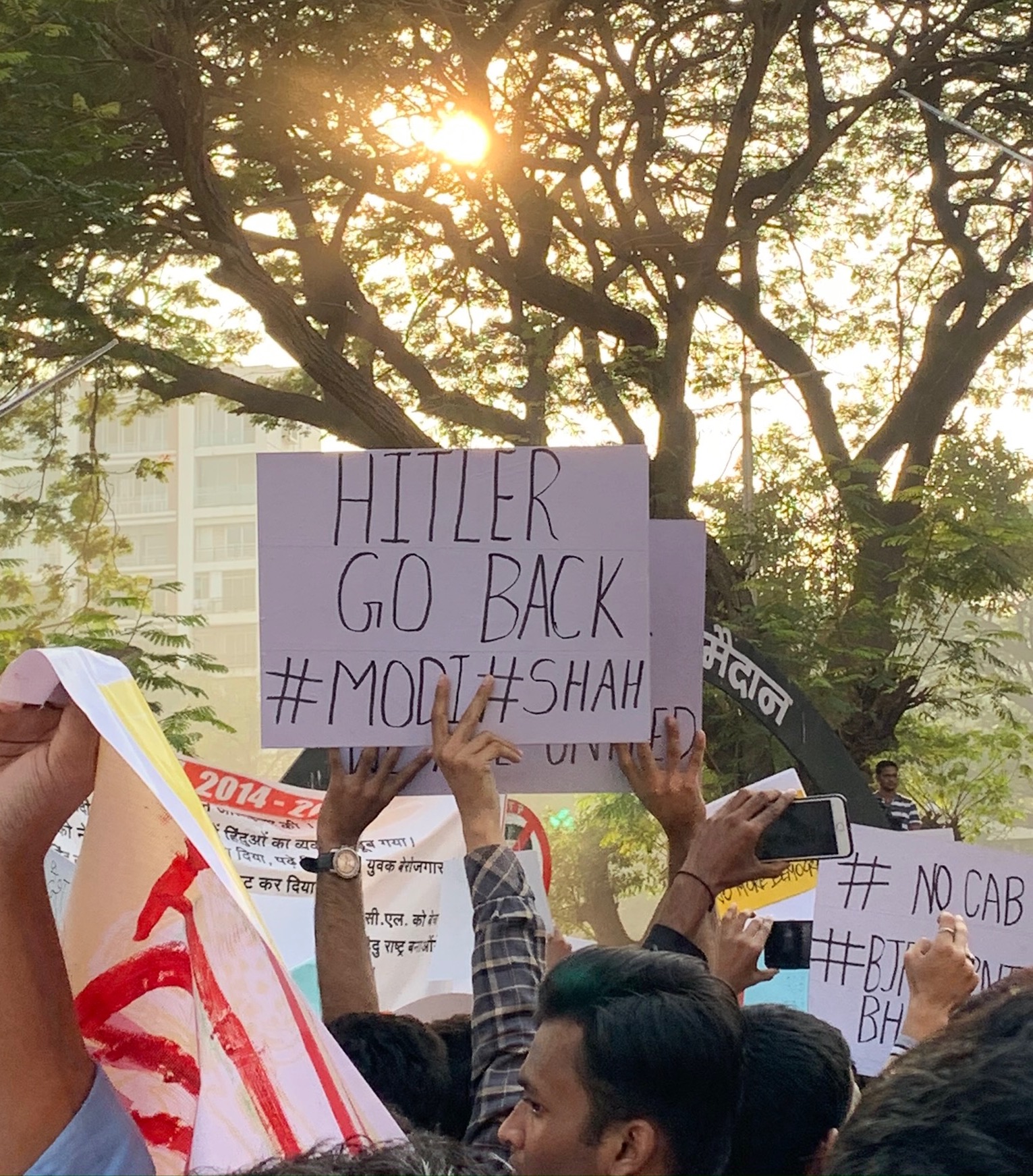 I am among the most privileged people walking the streets of Mumbai in these protests, and, I thought at first, surely one of the most irrelevant. I am an American citizen; you can hear it in my vocal fry. I am an Indian American, though, and as the holder of an Overseas Citizen of India card — a kind of permanent visa that permits me and others with demonstrably Indian (and no Pakistani or Bangladeshi) lineage to visit, live, and work in India indefinitely, though not vote; a compromise in lieu of dual citizenship — my legal identity is inextricable from the very laws I now find so abhorrent. We diasporic Indians have benefited from citizenship laws that have allowed us to belong, in some way, to a country we or our parents thought had been left behind for good. We are part of this muddle, too; we have no choice but to engage.

And it turns out that we holders of OCIs could be targeted by these laws, too. As the BBC and Economic Times report, a lesser-known component of the CAA allows the Indian government to cancel the OCI cards of anyone found to violate the CAA — perhaps by being of part Muslim heritage, even if at least one parent is from India — or other components of Indian law. Longtime watchers of Indian political shenanigans will not be surprised by this. Diasporic dissenting Indians have had their ostensibly lifelong OCI status stripped before, some in high-profile situations like that of writer Aatish Taseer, and others in cases that fly below the radar. Now, it’s just a more officially legitimized practice. 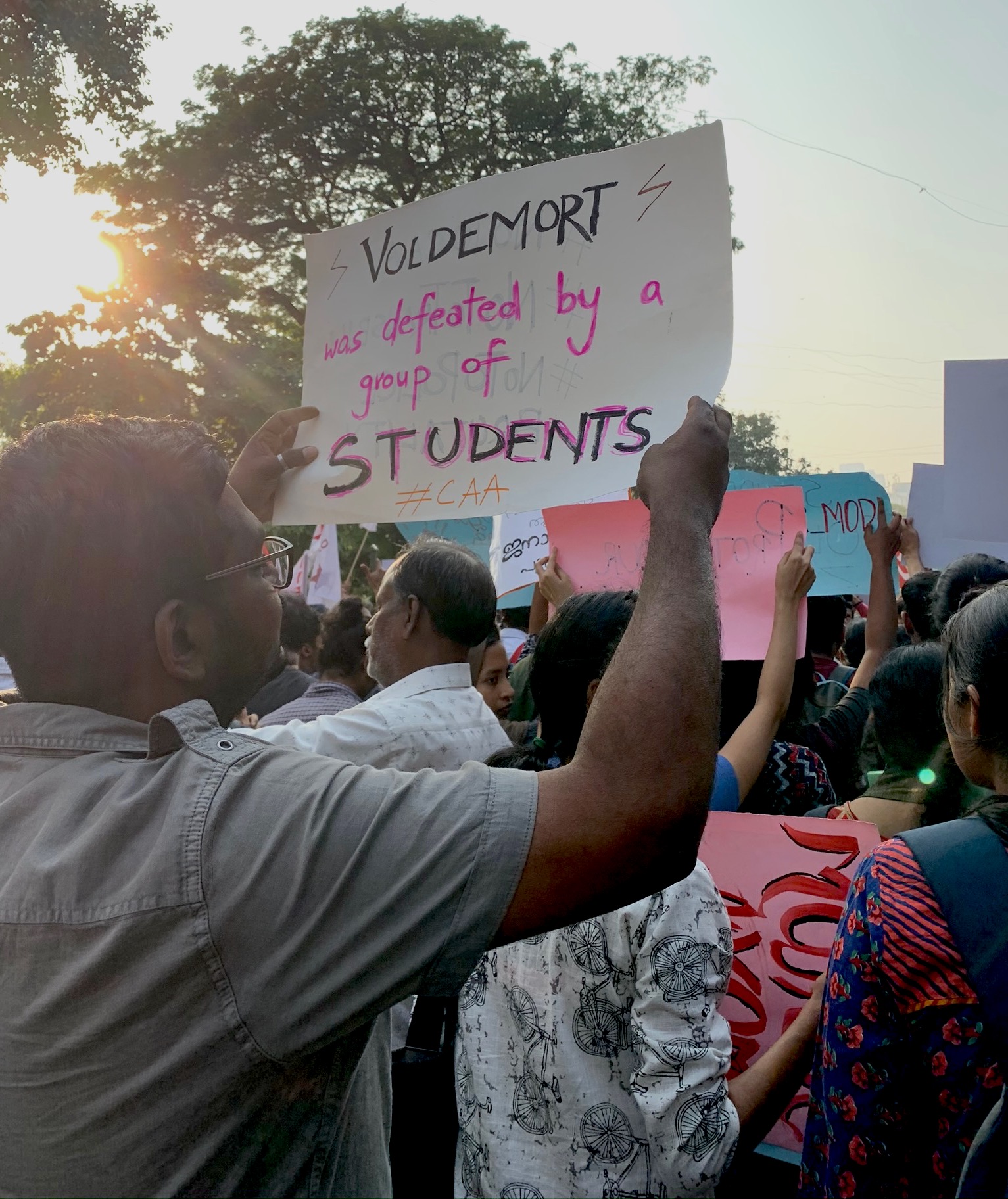 So perhaps I have a small and personal duty to be in the streets — a duty to myself and other Indians who depend on OCIs to come home and see their ailing or aging grandparents or parents, or to financially support those counting on them abroad.

But more importantly, I think I have a duty to be in the crowds to feel my own needs transmuted into a larger need, to be surrounded by that sublime jostling that is uniquely Indian, yet which becomes infinitely more polite amid anti-authoritarian chants than at rush hour in Dadar station.

The Modi government gains legitimacy from non-resident Indians, including those who gathered to take his darshan in Houston this year. This fact strikes me as nothing more than a great failure of our community’s empathy. Shouldn’t we, as products of migration or as migrants ourselves, understand better than anyone how precious citizenship is? Shouldn’t we be the ones most ardently defending its integrity?

My OCI card made and remade me. I have been able to live in India and work as a reporter and writer here intermittently since 2015. Coming and going, I treasure the feeling of that light-blue document in my hands as much as the heft of the navy-blue American passport it pairs with. I never imagined I could be at home in Mumbai — which is Bombay, to me — to do small things like buy vegetables in a language I’ve fought to learn, and to do big things like climb a fence in the Maidan to join in a call-and-response recitation of the Indian constitution, the words secular and democracy rippling out through the natural amplification of our Occupy-style human microphone. Nearly as many lifted arms hold phones as they do signs, and the obsessive Instagramming and Tweeting and Facebooking suddenly feel unselfish for a change, because as people try to catch a fleeting 4G signal, they, too, are amplifiers. The videos and photographs are indelible online. As long as there is internet, there is proof of injustice and dissent. 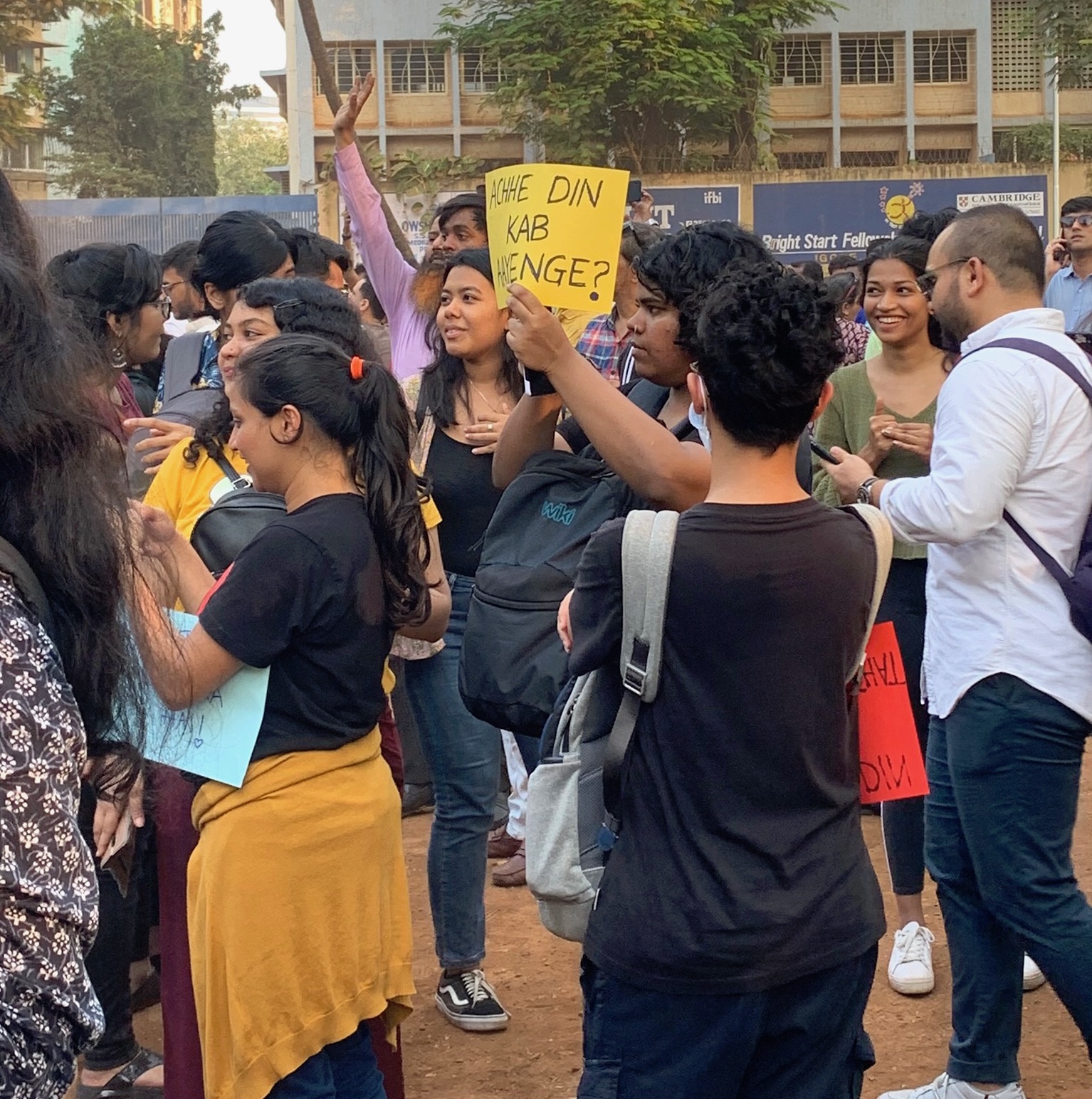 I don’t quite know who I am when I step out of auto-rickshaws or off of trains this week and give myself over to the crowd. I am dazed to see the way the hordes move together and apart, guided like tides by some invisible daytime moon. In Bombay we are peaceful and lucky, sometimes even blithe. We run into everyone we know, we say hello and for a moment we can forget why we are here because we are so at home in the swarm; we take the free water from the organizers, we give someone ten rupees to buy nimbu pani. It seems impossible that the thousands of people on the streets (numbers are imprecise: 10,000? 25,000?) are a minority, a mere headline, because it seems the whole world has turned out in a mix of fury and glory.

The Muslim shopowners lined up silently in white kurtas and skullcaps, arms folded, in ghostly, dignified, Gandhian resistance. The eager, scruffy Communists with their competing flags and acronyms. The uncles sporting Congress topis. The college-aged women in burqas with kohl-lined eyes and the wittiest signs. The tattooed and pierced queers, and the white-haired, neatly groomed South Bombay aunties in their starched block-printed salwar kameezes.

Modi, dog-whistling, says you can know who the protesters are by the way they dress; he has missed the sense of sartorial plenty, the multitudinous thrumming of the crowd. And me, in that crowd — am I another brown body just there to fill the streets, a brute corporal signifier that injustice can be beaten back by physical presence? Am I an ambassador of the diaspora, there to demand my rights, or using my privilege to demand others’ rights, too? Am I a denizen of Bombay, someone who has come of age in this city through the extraordinary fortune of malleable citizenship, who has made friends and been in love and been sweaty on a dance floor and sweaty on the local train and now sweaty among these thousands of other humans crying azadi, azadi? Am I fighting for the right to be legally defined as a somebody? Or am I blissfully nobody, consumed by the crowd, offered up to the movement?